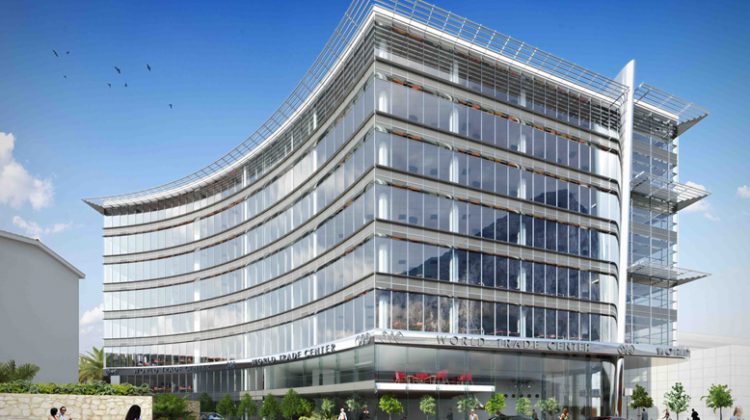 Following an agreement with the Government of Gibraltar announced this week, the £45m, World Trade Center Gibraltar project is expected to break ground in the first half of 2014 and be ready for occupation by the end of 2015.
Delivering a world-class working environment in what will be the largest single office building on the Rock at 15,464m², World Trade Center Gibraltar (WTCG) will be intrinsic to the next phase of Gibraltar’s economic growth.  The project’s Head of Sales and Marketing, Pete Burgess, said, “It will put Gibraltar even more firmly on the world business map and provide local enterprises with the opportunity to promote themselves across the globe through the World Trade Center Association which operates on every continent.”
“World Trade Center Gibraltar will become a trusted partner for companies in Gibraltar and offer space to businesses of all sizes, from one man start-ups to major corporates, helping them to profitably manage growth,” continues Pete.  “It will be the perfect entry point to the territory for new companies that wish to take advantage of Gibraltar’s well-known corporate tax benefits as well as providing bespoke, completely flexible, prestigious solutions for those businesses that are already here.”
“Businesses locate to World Trade Centers across the globe because they know they will get premium quality accommodation and service at the world’s signature corporate address.  That is why World Trade Center is home to some of the world’s biggest brands such as Apple, MasterCard and J.P.Morgan.  In fact, the majority of the world’s top 500 corporations have an office in a World Trade Center.”
The developer also believes that the project will act as a catalyst for attracting digital businesses to Gibraltar by being the only office development in the territory connected directly to the new Europe-India undersea fibre-optic cable which gives 100GB bandwidth and data transfer speeds of 3.2TB per second.  This will allow trading on the major stock exchanges in milliseconds, vital for companies dedicated to trading stocks and bonds.
“No one locally can compete,” finishes Burgess.  “We’re ideally located just nine minutes from Gibraltar’s new £65m international airport terminal and the border with Spain, four minutes from the town centre and only one minute from the bars and restaurants of Ocean Village Marina, Gibraltar’s premier residential and retail development.  It’s little wonder contracts have already been issued to our anchor tenant and negotiations are ongoing for a ‘big five’ accountancy firm and a New York securities trader.”
WTCG will have ground floor parking as well as allocated spaces in a new 500-space multi-storey car park, a 24 hour double-height reception, breakout and relaxation areas for employees and visitors, an international café brand, and a fabulous landscaped tree-filled atrium running the full length of the building.
The project, from the same developer as Ocean Village, is accompanied by the planned construction of nearby short-stay residential accommodation to help alleviate the current shortage, and an additional 900m² of eco-friendly healthy working offices which are already under construction.  The first phase, Trinity House, is at an advanced stage and scheduled for completion within 14 weeks.  Using solid cross-laminated timber from sustainably grown forests, it’s the first nearly carbon-neutral building in Gibraltar.  Delivered cut-to-size from Austria, the process offers the shortest possible construction periods, minimising on-site disruption, without compromising high quality standards.  The new offices have already been pre-let to a private international bank and to a European lottery company, bringing 100 desk-based jobs to the Rock.
Over the last five years Gibraltar’s economy has flourished despite the global economic turmoil. Gibraltar’s GDP is estimated to have grown by 35% with 7.8% in 2012/2013 alone – and is ranked in the top 20 for growth globally.  Shipping, financial services, tourism, and more recently, online gaming (28 e-gaming firms now account for 20% of Gibraltar’s GDP), form the keystones.  Its staunchly British community of 30,000 enjoys a GDP per capita of £41,138 and unemployment is less than 2%.  The 6.8km² territory enjoys a legal system based on UK common law, low business-friendly taxation, no CGT nor VAT, little red tape, EU membership and regulation, OECD White List status, a strategic geographic position, English language, Latin flavour and year-round sunshine.
For more details, contact Pete Burgess on +350 200 74724, or pete@worldtradecenter.gi www.worldtradecenter.gi