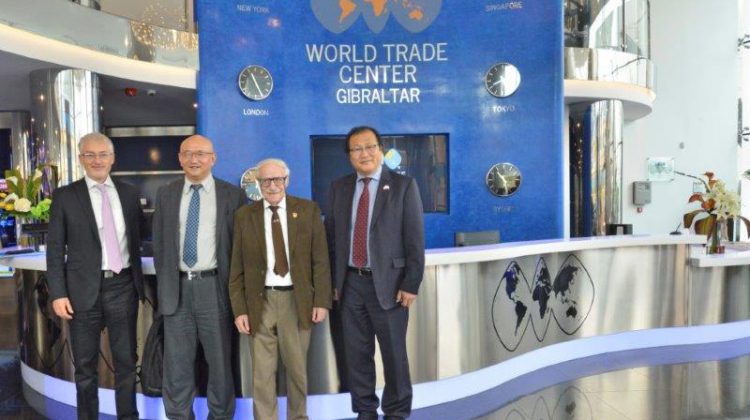 3rd November 2017, GIBRALTAR – A senior Chinese delegation led by the Chinese Embassy’s Minister Counsellor for Economic and Commercial Affairs, Mr Jin Xu, visited World Trade Center Gibraltar (WTC Gibraltar) today with HM Government of Gibraltar, to discuss ways in which trade can be enhanced between China and Gibraltar.
Senior representatives from the Chinese Embassy to the UK, the China Council for the Promotion of International Trade (CCPIT) and the Department of Commerce for Hunan Province attended, in addition to high level representatives from China’s largest commercial property company, the Wanda Group, the world’s largest development finance institution, China Development Bank and Asia’s largest reinsurer, China Re. The delegation was accompanied by The Hon. Minister Joe Bossano MP and senior Civil Servants from 6 Convent Place and the Government’s Hong Kong Office.
After opening close to capacity in February as the largest Grade A office building in Gibraltar, much of the discussion revolved around the need for an extended World Trade Center Campus to accommodate the economic growth aspirations of Gibraltar. The unprecedented growth in the FinTech and eMoney sector is seen to be an increasingly urgent issue, taking place at a faster rate than the office space required from WTC Gibraltar can be built. This is particularly evident in the case of 44 new businesses that have taken on incubator space in Regus, within WTC Gibraltar, only to find that their growth may be restricted by a lack of available space, of equivalent quality and brand recognition, to expand into.
For press enquiries or any further information on WTC Gibraltar, please contact the Front of House Manager, Mariela Gancheva (mariela@worldtradecenter.gi)